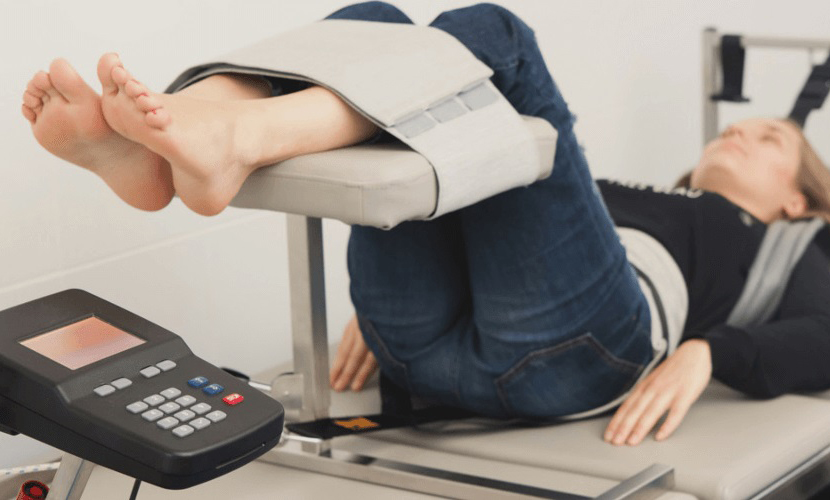 Lumbar traction is the process of applying a stretching force to the lumbar vertebrae through body weight, weights, and/or pulleys to distract individual joints of the lumbar spine. The word traction is a derivative of the Latin word "tractico", which means "a process of drawing or pulling, and various forms of spinal traction have been described, since the time of Hippocrates, for the relief of pain.

The lumbar spine is made up of five individual vertebrae which are numbered L1 to L5 and together they create the concave lumbar curvature in the lower back. Found along the body’s midline in the lumbar (lower back) region, the lumbar vertebrae make up the region of the spine inferior to the thoracic vertebrae in the thorax and superior to the sacrum and coccyx in the pelvis.These vertebrae carry all of the upper body’s weight while providing flexibility and movement to the trunk region. They also protect the delicate spinal cord and nerves within their vertebral canal.

Connecting each vertebra to its neighbouring vertebra is an intervertebral disk made of tough fibrocartilage with a jelly-like centre. The outer layer of the intervertebral disk, the annulus fibrosis, holds the vertebrae together and provides strength and flexibility to the back during movement. The jelly-like nucleus pulposus acts as a shock absorber to resist the strain and pressure exerted on the lower back.

The lumbar vertebrae are the some of the largest and heaviest vertebrae in the spine, second in size only to the sacrum. A cylinder of bone known as the vertebral body makes up the majority of the lumbar vertebrae’s mass and bears most of the body’s weight. Posteriorly the body is connected to a thin ring of bone known as the arch. The arch surrounds the hollow vertebral foramen and connects the body to the bony processes on the posterior of the vertebra. The vertebral foramen is a large, triangular opening in the centre of the vertebra that provides space for the spinal cord, cauda equina, and meninges as they pass through the lower back.

Extending from the vertebral arch are several bony processes that are involved in muscle attachment and movement of the lower back. The spinous process extends from the posterior end of the arch as a thin rectangle of bone. It serves as a connection point for the muscles of the back and pelvis, such as the psoas major and interspinales. On the left and right lateral sides of each vertebra are the short, triangular transverse processes. The transverse processes form important connection points for many muscles, including the rotatores and multifidus muscles that extend and rotate the trunk.

Several types of lumbar traction are described in literature but the most used include:

Physiotherapy, or physical therapy, deals with the science of restoring physical function and mobility through manual therapy and exercise. It is one of the best Physiotherapy Clinic based in Pune, providing systematic, organized and professional rehabilitation services. We are committed to offer high quality, new-age effective physiotherapy solutions along with effective treatment results in an honest, ethical, and professional manner.